A recent hobby over the past few months, which has been distracting me from blogging, has been leather crafting! Leather crafting is basically the creation small leather goods (like bags or wallets) out of leather, similar to sewing things from scratch, in that you need to cut pieces of a pattern out and stitch them together. It turns out to be surprisingly easy to get started and produce decent-quality goods. So in this post, I wanted to write about my recent fun times with leather crafting, some of the stuff I’ve made, and how it compares to stuff you can buy off-the-shelf in stores.

How on earth did I get into this? Well, it started with some late-night Googling (the beginning of all great adventures) looking for reviews on the Celine belt bag. I stumbled across this Medium post by Alana, who made a Celine bag knockoff, which I found really interesting. I had no idea it was possible to create these kinds of goods was possible without production-level equipment! From there, I started searching for other reviews that talked about bags from a leather quality/construction perspective, and found The Leather Crafter’s blog. She talks about her experience going to leather school in Italy and also reviews other luxury bags. It was super interesting to me that these traditional handicrafts are still being taught.

From there, I was hooked. I started obsessively watching YouTube videos from leather crafting experts (Ian Atkinson and Hahns Atelier are my favorites for their soothing music/voice and detailed tutorials). There’s also a reasonably active Reddit community, r/leathercraft.

From my observations, there are several types of leather goods that the leather crafting community focuses on. There are the more traditional goods, like knife sheaths, gun holsters, or horse saddles, sometimes with beautiful elaborate patterns carved into them. More suitable to my lifestyle are more generic items, like belts or wallets. I was especially interested in doing recreations of leather goods that you could buy in a store, which looked (to my untrained eyes at least) to have relatively simple design (think of something like the Mansur Gavriel bucket bag). So I definitely wanted to focus on the second category.

I’m not up to making a full-fledged bag yet, though! To hone my skills, I decided to start with a couple of smaller items. First, I had to get ahold of some general tools and supplies. Some of them I purchased, and some of which I already had:

So not cheap, by any means! But I guess any hobby has startup costs. And I had researched leather crafting extensively for several weeks before making any purchases, so I felt reasonably that this wasn’t going to be a waste of money, where I would quickly tire of my new hobby.

I’ve been missing a nice leather belt. I did order a black one from Duluth Trading a few months ago, which is serviceable, but a bit too wide for my tastes (1+3/8″).  I think a slimmer belt is more versatile (can be worn at both the waist and the hips), and is also more proportional on my body type. A leather belt was listed as one of the beginner projects in my leathercraft book, so I figured I’d try it.

To make the belt, I needed the following raw materials:

After a few curses and much stabbed fingers, here was the outcome:

Verdict: For $8, I like it! It looks perfectly normal and like something that you could purchase off-the-shelf. The slight exception is that the small “keeper” strap near the buckle is a little crooked, due to some construction errors, but I’m trying not to be a perfectionist 🙂 Also, the leather dents a little more than previous belts I’ve bought (particularly where the belt holes intersect with the buckle), but I chalk that up to the type of leather that I used. It took me a few hours to make this, but I expect that it would be much faster next time.

Comparison to commercial product: I think it’s just as nice as the one I purchased from Duluth ($35)! And it’s customized to my preferred length, width, and color. If I used a higher grade of leather, like the bridle leather used in the Blake Goods belt that Goblin Shark wrote about, the total cost of my DIY version would be ~$25. I’ve purchased a few more belt straps since then to make gifts for S and my dad.

I love using notebooks to write down to do lists, random thoughts, and meeting notes. I don’t exactly follow the bullet journal method, but use notebooks more as a dump for random thoughts. Especially at nighttime, when my thoughts are sometimes racing and preventing me from sleeping, I find it really calming to write things down, to “lock them away” for tomorrow.

Somehow I always have a collection of fairly nice blank notebooks (gifts from students, freebies at conferences, etc.). But I was hankering after a nice leather version. I heard somewhere about these Midori Traveler’s notebooks, and thought it would be a good leather project. This was actually the first thing I made. 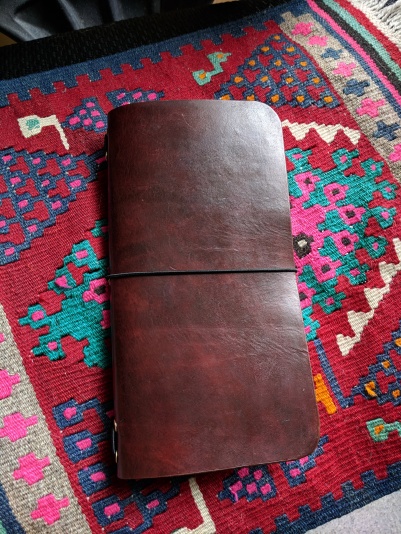 Verdict: I’ve been using this so far to keep track of new leather projects (ha!). It’s been working great so far. I keep getting more free notebooks (nice quality ones, too), so it’ll be a while before this becomes my primary notebook. But I like the style of these traveler’s notebook, and they feel sturdy.

Comparison to commercial product: A Midori notebook from the store is about $50, and an unbranded versions on Amazon is $30. I estimate the cost of this one to be ~$20.

I was always one of those people who scoffed at the idea of a passport wallet. Why would I need *another* case to store a passport, which already has a sturdy cover? But after one too many times of forgetting my immigration documents to enter the US, I decided that keeping all the documents together would be a good idea. Hence, the passport wallet, which can store my passport, green card, and (hopefully, pending approval) Global Entry card.

In addition to the general supplies/tools mentioned above, I just had to purchase some leather for this. I used some pieces of scrap from a $15 bundle of scrap, so let’s say $5 of that was used for this project.

Verdict: This was the second project I made, and I think it went fairly well. The tan dye turned out how I wanted it, and in person it has a nice sheen. If you look closely at the pics, you’ll see that my stitching is a bit wobbly. But it fits the cards and the passport snugly, which is the main point.

Comparison to commercial product: Madewell has a passport wallet for $30, which, IMO, looks much less nice (more boxy and less refined). I like mine better, heh.

My new laptop (a Lenovo Carbon X1) was slightly longer than my old 13″ Macbook Pro, so I had a hard time stuffing it into my old sleeves. I’ve always liked fancy hipster laptop sleeves, so I decided to try making my own. This was my most ambitious project to date, and needed a larger piece of leather than before. I estimate I paid about $45 for the leather I needed. I made up a custom pattern based on the size of my laptop.

Verdict: It’s a bit snug because I made it too small! The first time I put my laptop inside, I nearly couldn’t get it out again. Now it’s loosened up a bit, but it’s still tight. Normally, I don’t mind taking a few extra seconds (like 10 seconds) to wriggle the laptop out. However, I’ve had some embarrassing experiences in the TSA line at the airport. Never again!

To be honest, I’m not sure if I would make a laptop sleeve out of leather again. Although it feels sturdy, it doesn’t provide much protection to jolts. Maybe I should’ve put in some kind of fuzzy lining as padding. It’s also HEAVY! This is a real pain when traveling. If there’s a next time, I would use some thinner leather and maybe felt lining.

This post is getting mega long, so I’ll just wrap up with some other miscellaneous items I made. One is a case for my sunglasses (cheapie ones from Amazon), and the other is a leather curtain pull for the curtain that divides my bathroom from my bedroom. (Why is there no door?? Seems to be a common architectural “feature” in this area.)

In summary, I’ve really been enjoying leather crafting so far. Beyond the planned items I talked about above, it’s nice to know that  I can make small things that satisfy useful needs. For instance, I recently bought a stainless steel reusable straw (regular AND boba size, hipster cred++), and rather than looking for a custom-fit case, I’ll just quickly whip one up out of scrap leather. The curtain pull was another example of something that was super simple to make, but which I would’ve spent way too long online searching for a commercial alternative. I think it looks pretty high-end, if I do say so myself.

By the way, in the above posts, I don’t want to sound obsessed with the cost of the DIY vs commercial versions of these products. I’m aware that products cost more in the store because of operational costs, labor, etc. I haven’t factored in the cost of my labor into the cost estimates above, because I consider working on these projects as mental relaxation, so the time spent is a benefit in my mind, not a cost 🙂

Have you DIY-ed anything recently? Ever see any store products make you think, “I could make it better”?

6 thoughts on “Fun with Leather Crafting”

Hi! I’m Jess, a twenty thirty-something living in California. By day, I’m a prof, and by night, I ramble on this blog. Read more.